Mrs. Mihajlovic with “ Russian Railways”: We continue with reconstruction of the Bar railway line 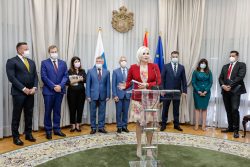 The contract for the project – technical documentation on the reconstruction and modernization of Valjevo–Vrbnica–state border with Montenegro was signed on 21 September in the presence of Deputy Prime Minister and Minister of Construction, Transport and Infrastructure, prof. Zorana Mihajlovic PhD, First Deputy General Director of Russian Railways Sergey Pavlov and the Ambassador of the Russian Federation to Serbia, Alexander Botsan-Kharchenko. The contract was signed by Director General of the “Serbian Railway Infrastructure” Nebojsa Surlan and Director General of the “ RZD International” Sergey Stoljarov.

Ms. Mihajlovic expressed on this occasion her pleasure because of the cooperation with one of the world` s best company, which confirms, by its dynamic and quality work on the most important and most demanding modernization project of the railway line Belgrade – Budapest, that this job is also going to be done with success.

“Serbia is determined to invest in infrastructure, especially in the railway, which is just as important as the road for the development of our country. We will also build a high-speed railway line Belgrade-Nis, as well as Nis-Presevo, we reconstruct regional railway lines. I believe that next year the construction of the new dispatch center will start, bearing in mind all the investment in railways. The reconstruction of the Bar railway line is very hard and demanding, there are 250 tunnels and more than 230 bridges, but I believe that “Russian Railways” will deal with this task and that works will start in 2022.” – said Ms. Mihajlovic.

The Ambassador of the Russian Federation to Serbia, Alexander Botsan-Kharchenko emphasized that joint projects which are being realized by “Russian Railways” in Serbia, are under the auspices of the two Presidents – Mr. Aleksandar Vucic and Mr. Vladimir Putin.