Blue train – The Train of Peace

THE BLUE TRAIN – one of the most popular trains in the world was built back in 1959 for the former president of SFRY (Socialist Federal Republic of Yugoslavia) Josip Broz Tito. The train was designed to provide a pleasant stay for Tito, as well as all necessary conditions for diplomatic protocol obligations while traveling across the country and abroad. 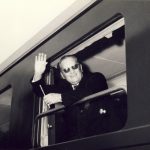 Tito in the Blue train while visiting
Kumanovo, 19th November 1961

The Marshal Tito crossed more than 600 thousand km in the Blue Train and traveled across the Yugoslavia, but also in: France, Poland, Austria, Hungary, Romania, Bulgaria, Greece, and SSSR. 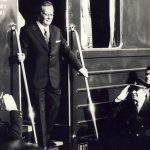 Tito at the train station in Bar during the opening ceremony of the railway line Belgrade-Bar, 28th May 1976 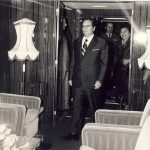 Tito and Jovanka Broz entering the Blue Train
at the Belgrade railway station, 28th May 1976

More than 60 foreign state officials and delegations traveled by this train and among them were also the most powerful politicians of 20th century:  Khrushchev, Brezhnev, U Nu, Nasser, Gandhi, Ahmed Ben Bella, Sekou Toure, Jalal Bajar, Constantine Karamanlis, the Greek King Paul and Queen Frederica, Queen Elizabeth, Prince Philip and Princess Anne, and many others. 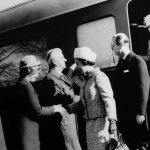 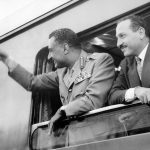 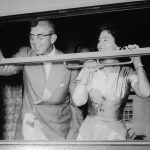 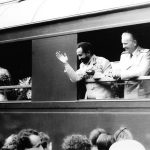 “The last journey” of Josip Broz Tito by the Blue Train was when he was transported from Ljubljana to Belgrade where he was buried in “The House of Flowers” in 1980.